We have performed a Monte Carlo simulation study of a system of ellipsoidal particles with donor-acceptor sites modelling complementary hydrogen--bonding groups in real molecules. We have considered elongated Gay--Berne particles with terminal interaction sites allowing particles to associate and form dimers. The changes in the phase transitions and in the molecular organization and the interplay between orientational ordering and dimer formation are discussed. Particle flip and dimer moves have been used to increase the convergency rate of the Monte Carlo Markov chain. 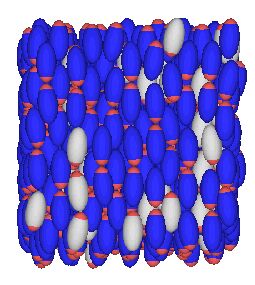